Studying Invasive Species with the LI-6800

Invasive species can alter ecosystems and food chains. None are quite like Tamarisk, also known as salt cedar. Tamarisk sucks up a ton of water and deposits salt when it sheds its leaves, making the soil inhospitable to other plants. “There’s not much left when Tamarisk comes to town,” says Randy Long, a PhD student at the University of California, Santa Barbara.

Randy’s doctoral dissertation is studying the local adaption of Tamarisk to environmental gradients, as well as interactions of carbon storage and herbivory. His primary species of interest is a hybrid swarm of Tamarix ramosissima and Tamarix chinensis. The hybrid’s genetic diversity means it can quickly adapt to local site conditions. So, Randy is looking at reciprocal treatments of high and low salinity, along with photosynthetic rates and carbon allocation. To do this, he’s using the LI-6800 Portable Photosynthesis System that he won for a field season.

Randy isn’t just studying Tamarisk. He’s also using the LI-6800 with Phragmites australis, an aggressive wetland grass. He’s finding that measuring flat irregular leaves, like grass, is easier with the LI-6800, saying, “Being able to enter the leaf width into the program has been really helpful to get real-time readings.”

Randy has noticed differences between the LI-6800 and its predecessor, the LI-6400XT Portable Photosynthesis System. “The LI-6400 is a great machine, but all the little tweaks you made to the LI-6800 improved the usability of it. The speed is great.” In particular, he likes how easy it is to get data. “Getting the data with a USB flash drive has made it much more streamlined.”

“I would never have imagined I could train an undergrad after just a few days being in the greenhouse.” Yet that’s exactly what happened. Explaining the difference, he says, “The LI-6400 was user-friendly, but you have to be a common user to be comfortable with it. Undergrads use the LI-6800 with me a few times and they’re not so afraid of it.” Now one of those undergraduate students, Gus VanKirk, runs CO2 response curves on his own.

Another lucky winner will get to use the LI-6800 for the 2018 field season—you can register to win the use of your own LI-6800 for 120 days. It might help you hit the ground running in your own research, like it has with Randy. “As far as the software and hardware goes, it’s been a joy to use.”

Catching Up with Randy after the Trial

August, 2017. Randy was kind enough to talk with us again after his 120-day trial was over, and give us an update on his summer research. He took measurements at Cibola National Wildlife Refuge near Yuma, Arizona, where one of his field sites requires a two-mile hike. According to Randy, “The shoulder harness made the machine easier to carry while hiking two miles.” Randy and his colleagues collected gas exchange and water potential data during the hottest part of the day—sometimes as hot as 120°F. “I usually win the Worst Field Site competition,” he said, laughing. Another difference he noted—the LI-6400 screen can get burnt out if it sits in the sun too long, but he “didn’t have that problem at all with the LI-6800, which is nice.”

Randy is studying carbon acquisition through gas exchange, as well as hydraulic traits like water use efficiency. He also collected data to see if there’s a difference in mesophyll conductance between cottonwood plants growing at lower versus higher elevations.

What’s next for Randy? “I’ve got more greenhouse experiments planned. I’ll do insect herbivory trials on plants at different salinities and see how they respond.”

Sadly, all good things must come to an end. When asked what he’d miss most from using the instrument, Randy said, “The two big things I’ll miss are the speed, how fast the LI-6800 is compared to the LI-6400, and the new user interface. When I was an undergrad and I was introduced to the LI-6400, it was terrifying. The touchscreen is much more user-friendly, and it makes the LI-6800 easier to approach and get comfortable with.”

Hopefully, he won’t be without an LI-6800 for long. “It’s going to be the first thing I put in for when I get a start-up budget.” 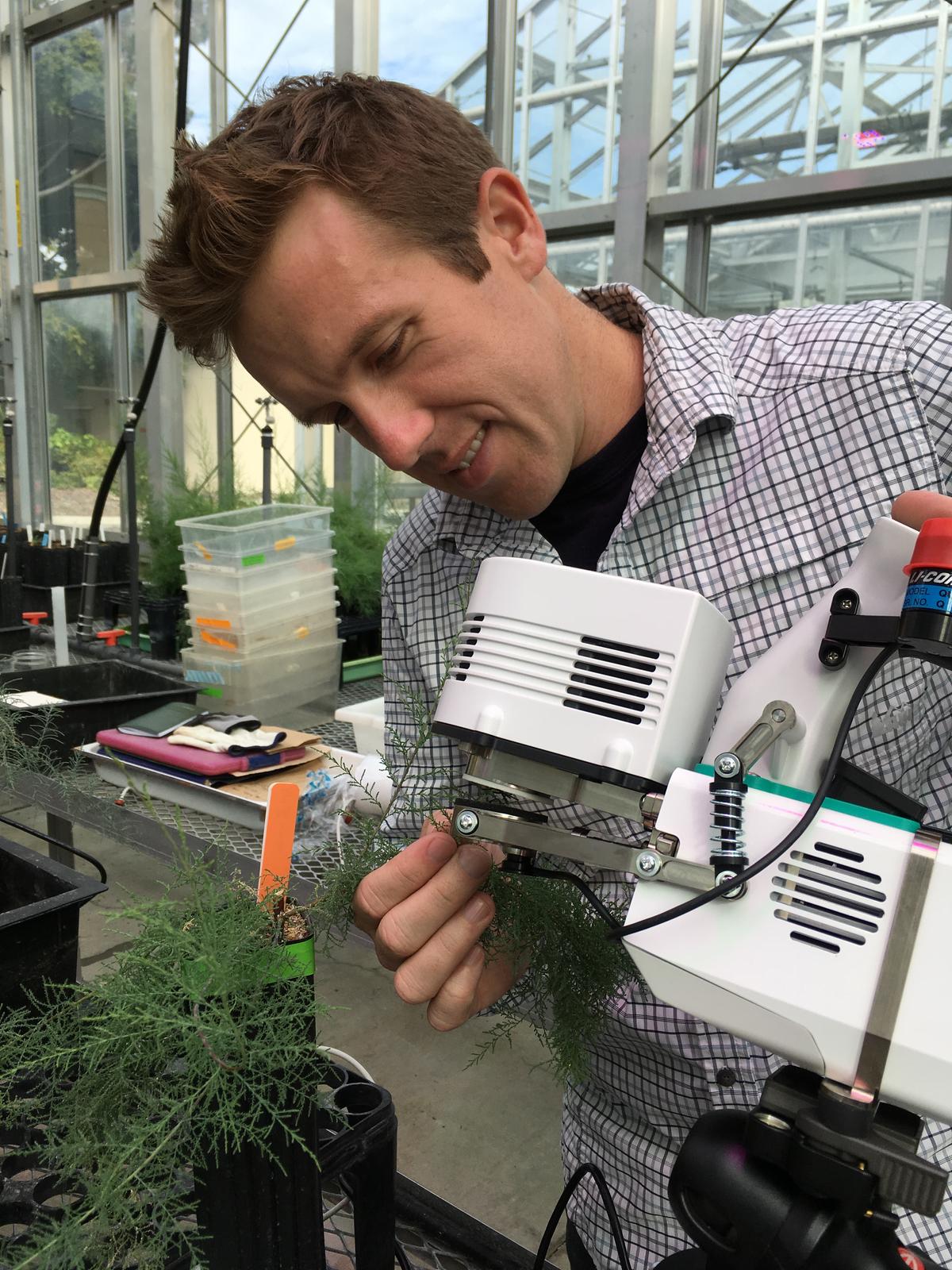 With novel innovations in every respect—gas analyzers, flow control, valve system, fluorometer, and the way these parts work together—the LI-6800 performs like a world-class orchestra.

See how the LI-6800 gives you the best performance.