Introduction to and Solutions for Microbiome Research

What is a Microbiome?

A microbiome is the community of organisms that lives in or on another organism or habitat. These organisms—called microbes—include thousands of bacteria, viruses, fungi, and protozoa that exist in the bacteriome, virome, mycobiome, and protozoa genome, respectively. Microbes are found in every organism and ecosystem on the planet, including soils, plants, and animals. Habitats and organisms form unique positive or negative relationships with their microbiomes; consequently, a host and its microbial community are known jointly as a holobiont. Therefore, a host can plausibly contain numerous genomes in addition to its own.1 The relationships within a holobiont and interactions between their genomes are gaining attention in the scientific community, becoming the foundation for many studies as they relate to soil, plant, and animal microbiomes.

For instance, soil-plant-microbe interactions are a rapidly increasing focus for microbiologists and ecologists. Dysbiosis of soil and plant microbiomes can result in nutrient deficiency and create a detrimental domino effect in their ecosystems. Microbiomes are also imperative to animal health. For instance, more than 100 trillion microbes—or ten times the number of cells2—in the human body play pivotal roles in food digestion, immune system regulation, disease protection, and vitamin production. Current studies are also focusing on human gut and brain microbiomes and their association with short- and long-term health.

While much remains to be known about microbiomes, modern technology is being developed to help investigate their diversity, features, mechanisms, and interactions with their host organisms and environments. Microbial-related drug development, for example, has increasingly gained attention and credibility in the scientific community and healthcare practices as research continues to progress.

Soil microbiomes are one of the most diverse habitats on the earth and are imperative to soil, plant, and animal health as well as numerous biological processes, such as nutrient cycling. The terrestrial carbon cycle, for instance, is highly dependent on microbial interactions and continues to be highly studied in microbiological and ecological research initiatives. Historic increases in atmospheric carbon dioxide concentrations have largely been attributed to anthropogenic activity, but natural and managed soils—including soil microbiome activity—are reportedly responsible for ten times the annual contribution from fossil fuel emissions. And while ocean microbiomes are key participants in similar processes, the earth’s carbon dioxide reserves would be entirely depleted in twelve years if soil microbial respiration was the sole provider and was terminated.3

Whether carbon enters the atmosphere as carbon dioxide or methane—or remains in the soil—is also influenced by soil microbiomes. The exact mechanisms, however, continue to be of primary focus in current studies. Research suggests that photo- and chemoautotrophic microbes aid in the carbon fixation stage, and heterotrophic microbes assist with the decomposition of organic matter. Arbuscular mycorrhizal fungi, for instance, mineralize carbon for approximately eighty-five percent of plant species worldwide. Other microbes consume carbon for their own metabolic processes and reproductive cycles.3

LI-COR soil gas flux instrumentation can be used to measure greenhouse gas (i.e., CH4, CO2, and N2O) emissions in various systems. In a 2016 study, for example, a LI-COR gas analyzer system was used to assess sugarcane green harvest system’s impacts on crop soil’s carbon dioxide fluxes and microbiomes compared to those of a crop burning system.4

While there is progress in understanding microbial influence on nutrient cycles, much remains to be known about soil microbiome diversity, including the beneficial and harmful relationships within and among microbial communities. Recently, soil microbiomes are being catalogued in their entirety in an effort to learn more about their diversity and interrelated functionalities. 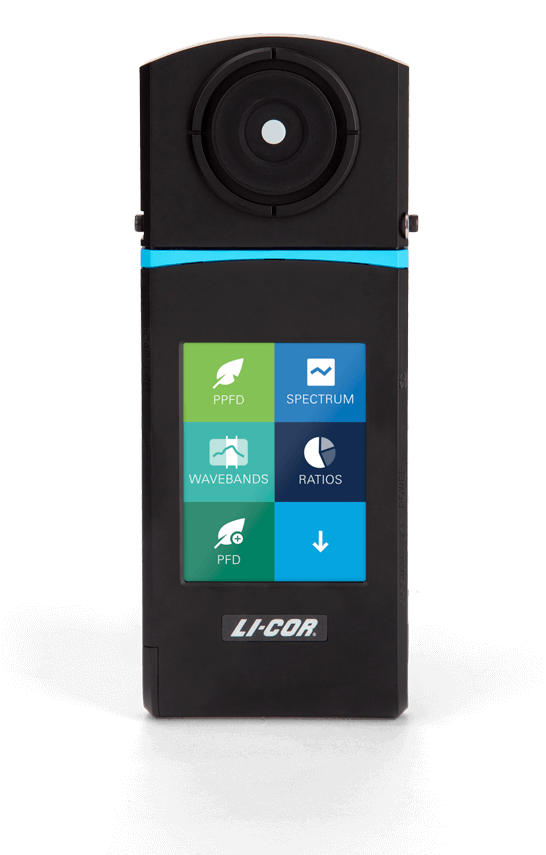 The LI-180 Spectrometer assessed the light intensity and spectral quality of peloid mud baths and thermal waters for a 2020 study that catalogued their microbiome diversity and chlorophyll a content in Italy’s Euganean Thermal District.5

Soil microbiomes function intimately with plant microbiomes, making it difficult to exclusively study one without the other. For instance, the bacterial, fungal, and archaeal microbes in the rhizosphere (i.e., the soil surrounding a plant’s roots) contribute largely to the overall health and productivity of their host. They aid in nitrogen and phosphorus uptake, organic matter decomposition, and mineral breakdown; as such, soil microbial density tends to be higher in plant-rich environments.6

Plants can even recruit specific microbial species that are key for defense and immune system benefits—allowing them to essentially construct a beneficial microbiome that is personalized to their specific biological needs.7 While the details on how this works remain largely hypothetical, current studies continue to focus on rhizosphere-specific microbes and their relationships with host plants.

LI-COR plant physiology instrumentation is commonly used to assess photosynthesis and plant activity in response to environmental conditions. A LI-COR portable photosynthesis system, for example, was used in a 2019 study whose findings suggest that soil origin is a primary influence on plant microbial (i.e., bacterial, archaeal, and fungi taxa) diversity.7

There is also an emerging focus on holobiont relationships between the plant phyllosphere (i.e., the aerial surfaces of plants, such as branches, flowers, and leaves) and their microbial inhabitants. Several studies suggest that, much like the soil-plant-microbe interactions, plants can also selectively assemble desirable microbes on their leaves. This theory suggests that microbiome compositions are not inherent to a given plant species but rather determined by an individual plant’s needs and immediate environment. Other researchers are interested in pinpointing a core microbial taxa per plant species.

While numerous microbiomes foster beneficial inhabitants, various microbes can form parasitic relationships with plants and animals and have harmful repercussions when ingested. In particular, the toxicity of certain plant microbial species and disease transference has become a growing concern for food safety. Research efforts have begun to focus on eliminating parasitic or harmful microbes from plants to protect crops and herbivorous consumers.

Animal microbiomes, much like soil and plant microbiomes, have considerable impact on a host’s health but whose functionalities remain largely ambiguous. Generally, microbes aid in stimulating animal immune system responses, breaking down compounds with digestive enzymes, and formulating essential vitamins—such as B12, which cannot be otherwise formed by plant or animal enzymes.

Current research suggests that animal—specifically human—microbial composition is largely influenced by external factors, beginning as early as birth. Cesarean versus vaginal birth, as well as the homogeneity of the mother’s vaginal microbiome, can impact the offspring’s likelihood of disease transmission and development and preterm birth.9 Other studies suggest that microbiomes form based on early life environmental factors, such as household pets, breastfeeding versus formula feeding, medications, hygienic practices, and diets. These influences, among many others, help sculpt a microbiome that affects the host animal’s future health—including its metabolism, behavior, and immunity.

Gut and brain health, for instance, is highly influenced by an animal’s microbial community. The gut-brain axis (GBA) is the biochemical signaling that occurs between the nervous systems and the intestine. These neural and hormonal signals can be activated by the brain to regulate gut cells and vice versa; certain microbes are thought to interact not only with intestinal cells but the central nervous system’s metabolic pathways as well. Microbial interaction with the GBA may be associated with various disorders and diseases—from anxiety and depression to Alzheimer’s disease and arthritis.

While disease-related research continues to pinpoint specific microbial influences, numerous studies aim to classify the entire human microbiome and provide a foundation for drug treatments. In 2007, the Human Microbiome Project (HMP) was founded by the National Genome Research Institute to characterize the microorganisms within the human body and determine their roles in health and disease. The first phase (HMP1) classified the microbiomes of three hundred participants; the second phase (iHMP) is conducting three long-term microbiome studies on Pregnancy & Preterm Birth, Onset of Type 2 Diabetes, and Onset of Inflammatory Bowel Disease (IBD). The HMP intends to create a more complete understanding of the human microbiome, so it can be used to develop drug therapies and improve human health. 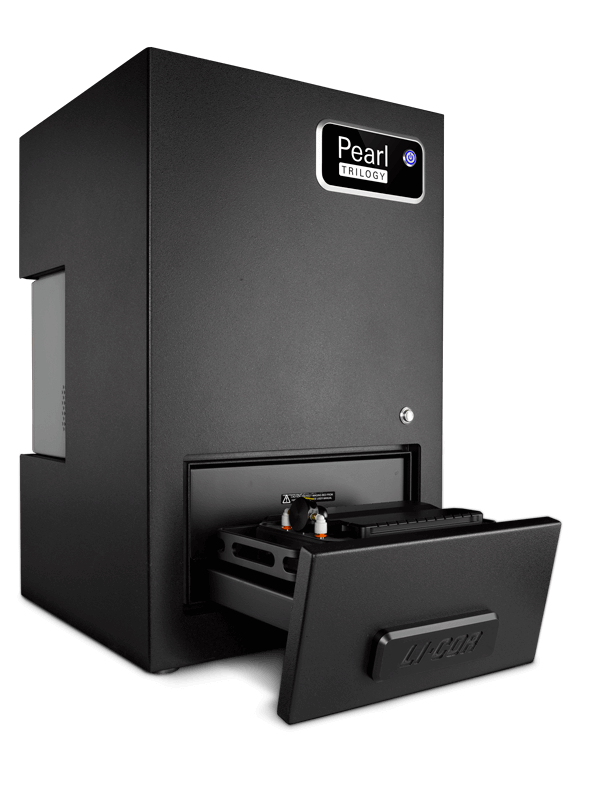 Today, drug development depends highly on microorganisms from soils, plants, and animals. In an effort to better understand a given microbiome’s influence on human health, bacteriomes and viromes are being identified and characterized. A deeper comprehension of their roles and interactions with other microbes and the host organism within a holobiont has the potential to assist in drug development and treatment options. They can be identified in several different ways: bacteriomes, for example, are commonly identified by sequencing 16s rRNA, which is a highly conserved sequence in bacteria; viruses, however, do not have highly conserved sequences, so a virus’s entire genome must be sequenced for identification purposes. 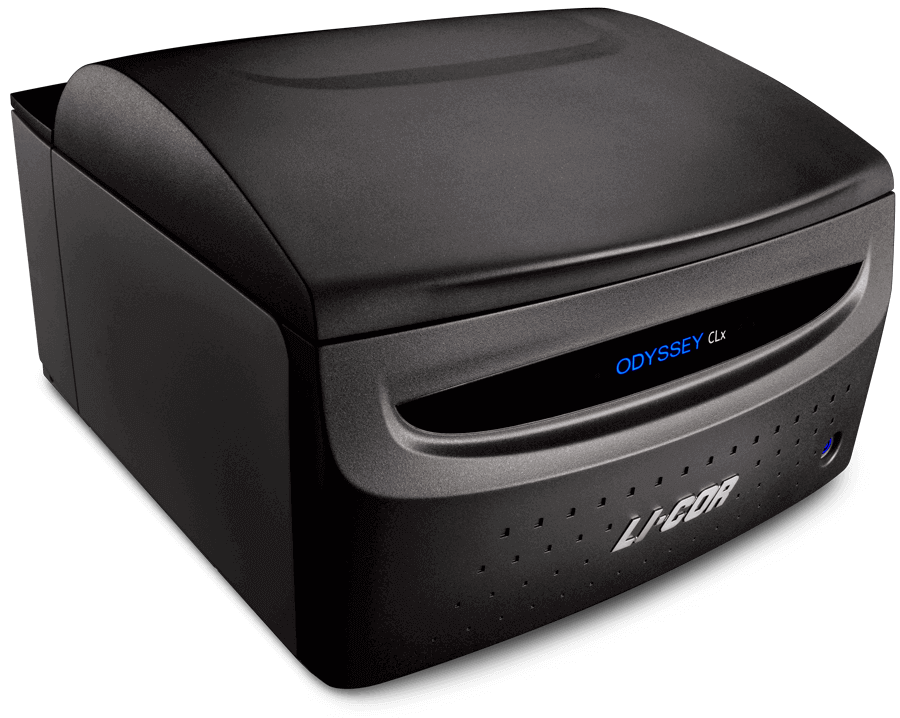 The Odyssey CLx Imager, Odyssey Blocking Buffer, and IRDye secondary antibody detected target proteins from rat liver in a 2020 study. The study used Western blotting to identify numerous metabolic changes due to broccoli intake—such as increased NQO1 and NRF2 protein expression—which may be useful in tracking and assessing liver health.11

Once identified and characterized, drug development research can commandeer microbial metabolic interactions for use in targeted therapeutics—including target characterization, target-microbiome interactions, and microbiome influence on signaling pathways. Cellular signaling in particular can be influenced by microbes that are in and on the human body: postbiotics—the metabolites that bacteria produce—actually aid in conveying signals throughout the host via cell signaling pathways and can ultimately impact health (e.g., cancer, autism, inflammation, and gut health).

Once microbial interactions with a given signaling pathway are better understood, their levels can then be adjusted accordingly. For example, when a microbe is harmful rather than helpful, it can be eliminated by other microbes (e.g., bacteriophages) or targeted by small molecules. If a microbe is found to benefit a given signaling pathway, it can be introduced or increased via prescription drugs. By studying which signaling pathways are directly or indirectly impacted by a given microbe, drugs can be developed that activate, inhibit, or modulate the pathway.

Each microbiome—within soils, plants, and animals—is important to the overall health and sustainability of an organism, and any change to one can directly and indirectly affect the others—including their inhabitants and given ecosystem. LI-COR Environmental and LI-COR Biotechnology offer complete, microbiome-based research solutions to delve into soil, plant, and animal microbiome studies and assist with microbial targeted therapeutics research and drug development. From microbiota presence and function to interactions and health-related impacts, LI-COR technology can help develop a deeper understanding of microbiome influence and drug development processes. Insight into this microscopic web has the potential to unlock a greater understanding of the earth’s functionality and the interconnectivity of its inhabitants, and LI-COR is excited to help researchers make this impact.

For more information on how LI-COR can help with your research initiatives, contact LI-COR Environmental and LI-COR Biotechnology today.

Got it Learn More