Optical imaging modalities are ideal for observing and characterizing biological and cellular processes in vivo with the right probe. These imaging modalities include detection using bioluminescence as well as fluorescence. Molecular activity can be measured by optical imaging either directly, using fluorescence optical probes or indirectly, using cells transfected with luciferase gene or iRFP.

Near-infrared (NIR) optical probes can be used to illuminate features within the animal (bone, vasculature, etc.). These probes may include specific targeting agents or non-specific contrast agents conjugated to near-infrared dyes. 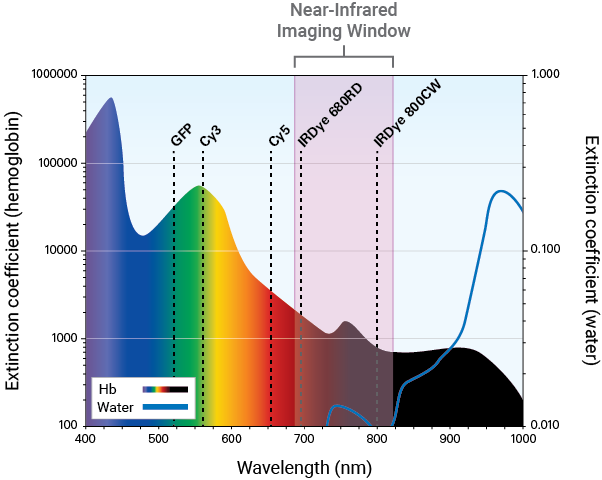 Detection in the NIR spectrum (680 nm to 820 nm) is ideal for measurement of in vivo molecular activity as it provides several advantages:

Light absorbance by, and background autofluorescence from animal tissue is significantly lower in the NIR region. These properties allow better light penetration and higher signal-to-noise ratios for detecting deeper targets in vivo.

Compared to other imaging modalities, images can be captured within seconds, allowing rapid screening of mice.

Compared to other modalities, optical imaging is more economical.

What is Bone Imaging?

Bone imaging is commonly used to provide anatomical landmarks to localize an area of tumor or disease. For instance, skeletal structures can be visualized using a dye-labeled bone targeting compound, while a second tumor-targeting agent labeled with a spectrally distinct dye, can help localize the tumor to bone anatomy. The two images can be overlaid to better define the location of the tumor or disease. Additionally, bone imaging in bone remodeling studies can detect bone growth or bone loss due to disease.

What is Vascular and Lymphatic Imaging?

The vascular endothelium in the tumor microenvironment is often discontinuous, which allows molecules to diffuse into the surrounding tissue.1, 2 Lymphatic drainage in these regions is also poor.3 As a result, the tumor tissue is permeable to large molecules, and retains these molecules. Because of these properties, tumor vasculature and lymphatics can be studied using in vivo optical imaging probes.

IRDye 800CW dye is detected in the NIR spectrum where background autofluorescence from tissues is low. As a result, high signal-to-noise ratios are generated and provide images with excellent quality and resolution.

*Success of vascular imaging depends on the mouse model used. Vessels may be less visible in mice that are obese or have hair.

IRDye 800CW PEG also serves as an effective lymph tracking agent and can be administered by intradermal injection (Figure 5). Other contrast agents labeled with IRDye 800CW have been used in intraoperative identification of lymphatic branches and small sentinel lymph nodes, and have outperformed NIR quantum dots.4

The Pearl Trilogy Imaging System allows visualization of vasculature and lymphatics, without the need to change exposure settings between scans. Watch this two-minute video on rapid time-lapse lymphatic and lymph node imaging.

Molecular activity can be measured using transfected cells or transgenic animals expressing either the luciferase gene (i.e., bioluminescence) or fluorescent proteins like infrared Red Fluorescent Protein (iRFP) (i.e., fluorescence). With specific promotors, these genes can be used to monitor levels of expression—either constitutive or inducible—within an animal in context of the disease being studied.

Bioluminescence is generally used for cell tracking and gene expression studies. Renilla luciferase and Firefly luciferase are the most commonly used enzymes in bioluminescence research. These enzymes oxidize the bioluminescent substrate luciferin, which results in an emission of light that can then be measured. Cells that constitutively express the luciferase gene can be injected into a mouse and followed over time for cellular distribution upon adding luciferin. Likewise, cells that express the luciferase gene under an inducible promotor can be monitored through various treatments to assess how the levels of expression change.

Bioluminescence can be detected using an imager like the Pearl® Trilogy Imaging System for in vivo molecular activity measurements. For example, a study compared D-luciferin and Cycluc-1 to determine which was a more robust luciferin substrate (Fig. 6). A cell-construct was implanted in mice, and xenografts were established. Upon the injection of substrate, the Pearl Trilogy Imager was then used to measure light production, and results suggested that Cycluc-1 was a more robust substrate than D-luciferin.

Near infrared (NIR) fluorescent protein expression can be used to measure cell tracking and tumor progression. Unlike bioluminescence, iRFP does not require the addition of a substrate for visualization but simply needs to be excited using a light source. The emitted light is then detected by an imaging system such as the Odyssey® M, Odyssey DLx, or Pearl Trilogy.

For in vivo molecular activity measurements, fluorescent protein expression can be detected using the Pearl Trilogy. For example, in a study by Henry et al., iRFP was used to detect the prostate cancer cell line 22Rv1 and monitor tumor growth in mice (Fig. 7). Images were then captured with NIR fluorescence and bioluminescence on the Pearl Trilogy imager.

Reporter proteins are frequently used to study the regulation of gene expression in vitro and in vivo. A reporter gene is placed under regulatory control of a promoter of interest. Upon expression, it produces either a luminescent or fluorescent protein that can be used to detect protein localization or measure expression levels. There are several fluorescent reporter proteins that are commonly used; iRFP713, for instance, is a near-infrared (NIR) fluorescent protein with high intracellular stability and brightness compared to other phytochrome-derived fluorescent proteins. It is non-toxic in mammalian cells. Upon excitation of light at 690 nm, a signal is emitted at 713 nm that can be detected and measured using an imager.6

The expression of an infrared fluorescent protein such as iRFP713 alleviates some of the issues seen with visible reporter proteins like GFP.7 NIR wavelengths allow for deeper tissue penetration of excitation light as well as lower background autofluorescence of cells and tissues. iRFP713’s properties and the benefits of NIR wavelengths make iRFP713 a valuable tool for researchers wanting to study protein expression in both cells and live animals.

A study by Hock et al., detected in vivo iRFP713 expression and confirmed its sensitivity in a Drosophila model with NIR fluorescence on an Odyssey Imager (Fig. 8). iRFP713 was then used to monitor tumor progression in a genetically engineered mouse model (GEMM) in vivo with the Pearl Trilogy imager (Fig. 9).